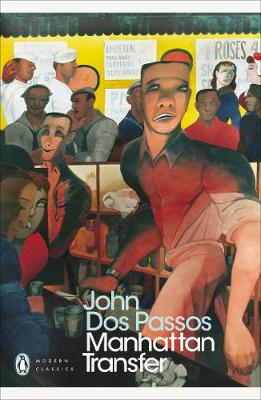 A modernist masterpiece, capturing ... the fragmented lives it sketches, in a dazzling kaleidoscope of New York City in the 1920s
Christopher Hudson, Evening Standard

Dos Passos has invented only one thing, an art of story-telling. But that is enough to create a universe
Jean-Paul Sartre

A modernist masterwork that has more in common with films than traditional novels, John Dos Passos Manhattan Transfer includes an introduction by Jay McInerney in Penguin Modern Classics. A colourful, multi-faceted chronicle of New York in the early 1920s, Manhattan Transfer ranks with James Joyces Ulysses as a powerful and often lyrical meditation on the modern city. Using experimental montage techniques borrowed from the cinema, vivid descriptions and bursts of overheard conversation, and the jumbled case histories of a picaresque cast of characters from dockside crapshooters to high-society flappers, Dos Passos constructs a brilliant impressionistic portrait of New York City as a great futuristic machine filled with motion, drama and human tragedy.

John Dos Passos (1896-1970) was born in Chicago, the son of an eminent lawyer. After graduating from Harvard he served in the US Army Medical Corps during the First World War, and dabbled in journalism before embarking on life as a writer. In 1925 he published Manhattan Transfer, his first experimental novel in what was to become his peculiar style - a mixture of fact and fiction. His began a series of panoramic epics of American life with the USA trilogy, using the same technique and tracing, through interwoven biographies, the story of America from the early twentieth century to the onset of the Great Depression in 1929.