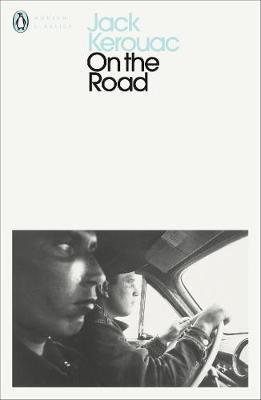 ON THE ROAD (PB FORMAT)

Επισκόπηση Βιβλίου
Five decades after it was first published, Jack Kerouacs seminal Beat novel On the Road finally finds its way to the big screen, in a production from award-winning director Walter Salles (Motorcycle Diaries) starring Sam Riley (Control, Brighton Rock), Garret Hedlund (Friday Night Lights), Kristen Stewart (Twilight), Kirsten Dunst, Amy Adams and Viggo Mortensen. Sal Paradise (Sam Riley), a young innocent, joins his hero Dean Moriarty (Garrett Hedlund), a traveller and mystic, the living epitome of Beat, on a breathless, exuberant ride back and forth across the United States. Their hedonistic search for release or fulfilment through drink, sex, drugs and jazz becomes an exploration of personal freedom, a test of the limits of the American dream. A brilliant blend of fiction and autobiography, Jack Kerouacs exhilarating novel swings to the rhythms of 1950s underground America, racing towards the sunset with unforgettable exuberance, poignancy and autobiographical passion. One of the most influential and important novels of the 20th century, On the Road is the book that launched the Beat Generation and remains the bible of that literary movement.
The most beautifully executed, the clearest and the most important utterance yet made by the generation Kerouac himself named years ago as beat.
The New York Times
Pop writing at its best. It changed the way I saw the world, making me yearn for fresh experience
Hanif Kureishi, Independent on Sunday
On the Road sold a trillion Levis and a million espresso machines, and also sent countless kids on the road William Burroughs.